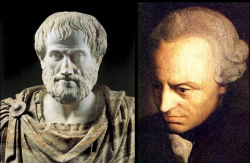 Did the ancients get it right? Indeed, better than the moderns? No, this conversation between Dan Kaufman and I is not about mystical insights or the secret scientific knowledge of the people who built the pyramids. Rather, it’s about what, if anything, ancient philosophers understood about the human condition that was then lost by the philosophy that developed during and after the Scientific Revolution.

We begin with an overview of the differences between ancient (meaning, Western, pre-middle ages) and modern (meaning, post-Descartes) philosophy, focusing on the early idea, later abandoned, that philosophy is not just a discipline of study, but a way of life. That turn toward a specialized field of inquiry began to take place during the Scientific Revolution of the 17th and 18th centuries, and of course has accelerated with the rise of the modern academy in the 20th century, especially after War World II.

About halfway through the video we switch gears, from talking about philosophy in general to tackling ethics more specifically, an area where the differences between ancients and moderns are particularly stark. Specifically, we discuss the question of why philosophers at some point turned away from an ethics based on the concept of virtue and embraced the idea of moral values and judgments, a turn that both Dan and I — for different reasons — think was not exactly the brightest idea ever. The conversation ends with a discussion of whether universal ethical principles exist. (Hint: not really, but it’s complicated.)

148 thoughts on “Ancient vs modern philosophy”