Mathematical Platonism is one of those things I changed my mind about over time. And, of course, I may change it again. I began with curiosity and at least partial assent, convinced that mathematics is, indeed, uncannily weird. Too weird for there not to be some substance to the idea that mathematical truths are not invented by mathematicians, but rather “discovered,” in a way analogous to how astronomers discover planets (though, obviously, not literally: no telescope will ever show you the Pythagorean theorem…).

Here is an article I wrote for Philosophy Now back in 2011 where I sympathize with the Platonists. But by 2013 I strongly rejected the idea as presented by mathematician Max Tegmark (see this post at Rationally Speaking), and in 2015 I finally found what I still consider a good, non-Platonist, explanation of the weirdness of mathematics, as proposed by physicist Lee Smolin and summarized in this essay in Scientia Salon. Two more years have passed, so I guess it’s time to revisit the issue once more.

This time the springboard is provided by a critical paper by theoretical physicist Carlo Rovelli, entitled “Michelangelo’s stone: an argument against Platonism in mathematics,” published in the European Journal for Philosophy of Science (available for free here). Let’s take a look.

Rovelli asks whether there is a Platonic world M of mathematical facts, and, if so, what M may contain, precisely. In his paper he submits that if M is too large, it is uninteresting (in a sense to be explained in a minute), and if it is smaller and interesting, then it is not independent of us. Both alternatives — he says — challenge mathematical Platonism. He suggests that the universality of human mathematics may be a prejudice and illustrates contingent aspects of classical geometry, arithmetic and linear algebra, using them to make the case that what we call mathematics is, in fact, always contingent.

Rovelli begins by defining mathematical Platonism as “the view that mathematical reality exists by itself, independently from our own intellectual activities,” and acknowledges that it is a position accepted by some leading mathematicians, and so not to be taken lightly. He then introduces the idea of a mathematical world M of which he sets out to investigate the major characteristics.

First off, then, what does M contain? “Certainly M includes all the beautiful mathematical objects that mathematicians have studied so far. This is its primary purpose. It includes the real numbers, Lie groups, prime numbers and so on. It includes Cantor’s infinities, with the proof that they are ‘more’ than the integers, in the sense defined by Cantor, and both possible extensions of arithmetic: the one where there are infinities larger than the integers and smaller than the reals, and the one where there aren’t. It contains the games of game theory, and the topos of topos theory. It contains lots of stuff.”

But of course M — for a Platonist — also contains all the mathematical objects that mathematicians haven’t discovered yet. Rovelli says that M must contain the ensemble of all non-contradictory choices of axioms. “But something starts to be disturbing. The resulting M is big, extremely big: it contains too much junk. The large majority of coherent sets of axioms are totally irrelevant.” Ah, but irrelevant to what, and according to whom?

Here is where Rovelli introduces the metaphor that gives the title to his paper:

“During the Italian Renaissance, Michelangelo Buonarroti, one of the greatest artists of all times, said that a good sculptor does not create a statue: he simply ‘takes it out’ from the block of stone where the statue already lay hidden. A statue is already there, in its block of stone. The artists must simply expose it, carving away the redundant stone. The artist does not ‘create’ the statue: he ‘finds’ it.”

Sounds familiar? That’s pretty much what mathematical Platonists (or, really, Platonists of any stripe) claim. Rovelli acknowledges that, in a trivial sense, Buonarroti was right, since the statue is made of a subset of the grains composing the original block of stone. The problem is that there is an infinite number of such subsets, and that it is the artist that — arbitrarily — picks the subset that will then become the finished statue.

Here is an example of a Michelangelo statue, the horned Moses, that I photographed in the Church of St. Peter in Chain in Rome: 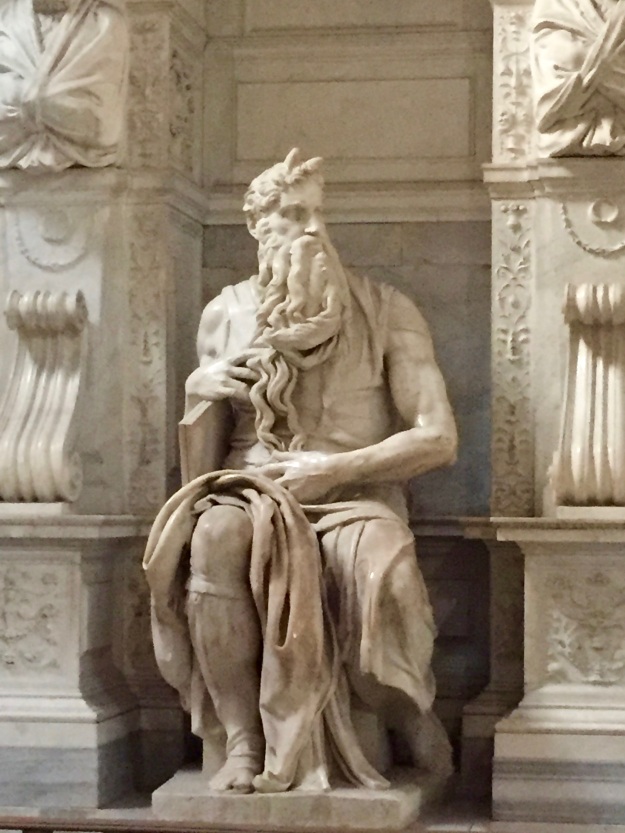 Rovelli goes on to say that one can tell the same story about the ensemble of all possible books, as recounted in the beautiful story by Jorge Luis Borges, The Library of Babel.

“Like Michelangelo’s stone, Borges’s library is void of any interest: it has no content, because the value is in the choice, not in the totality of the alternatives.”

Rovelli, intriguingly, goes further and says (correctly, I think) that science itself could be regarded in the same fashion, as the denotation of a subset of all of philosopher David Lewis’s possible worlds (see modal logic).

“What we call mathematics is an infinitesimal subset of the huge world
defined above: it is the tiny subset which is of interest for us. Mathematics is about studying the ‘interesting’ structures. So, the problem becomes: what does ‘interesting’ mean?”

The next step in Rovelli’s paper is to highlight the fact that interest, so to speak, is in the eye of the interested: “What is it that makes certain sets of axioms defining certain mathematical objects, and certain theorems, interesting? There are different possible answer to this question, but they all make explicit or implicit reference to features of ourselves, our mind, our contingent environment, or the physical structure our world happens to have.”

But, the Platonist will object, we actually expect any intelligent life form in the universe to arrive at the same mathematical truths that we have discovered. Well, do we? As a way to undermine this claim, Rovelli presents a number of examples in which what appears to be universal mathematics turns out, in fact, to be contingent on human peculiarities or on the human point of view. His case studies include: the geometry of a sphere, linear algebra, and the idea of natural numbers. All three are worked out in some detail, but I will pick just the latter for illustration.

“Natural numbers seem very natural indeed. There is evidence that the brain is pre-wired to be able to count, and do elementary arithmetic with small numbers. Why so? Because our world appears to be naturally organized in terms of things that can be counted. But is this a feature of reality at large, of any possible world, or is it just a special feature of this little corner of the universe we inhabit and perceive?”

The latter, argues Rovelli. First off, “the notion of individual ‘object’ is notoriously slippery, and objects need to have rare and peculiar properties in order to be countable. How many clouds are there in the sky? How many mountains in the Alps? How many coves along the coast of England? How many waves in a lake?How many clods in my garden? These are all ill-defined questions.”

Then Rovelli introduces a thought experiment that directly challenges the Platonist view:

“Imagine some form of intelligence evolved on Jupiter, or a planet similar to Jupiter. Jupiter is fluid, not solid. This does not prevent it from developing complex structures: fluids develop complex structures, as their chemical composition, state of motion, and so on, can change continuously from point to point and from time to time, and their dynamics is governed by rich nonlinear equations.”

The problem, however, is that there is nothing to count in a fluid environment, so our hypothetical Jovians will be highly unlikely to “discover” the natural numbers.

“The math needed by this fluid intelligence would presumably include some sort of geometry, real numbers, field theory, differential equations…, all this could develop using only geometry, without ever considering this funny operation which is enumerating individual things one by one. The notion of ‘one thing,’ or ‘one object,’ the notions themselves of unit and identity, are useful for us living in an environment where there happen to be stones, gazelles, trees, and friends that can be counted. The fluid intelligence diffused over the Jupiter-like planet, could have developed mathematics without ever thinking about natural numbers. These would not be of interest for her.”

So we may have a concept of integers because of the peculiarities of the Terran environment. Moreover, continues Rovelli, “modern physics is intriguingly ambiguous about countable entities. On the one hand, a major discovery of the XX century has been that at the elementary level nature is entirely described by field theory. Fields vary continuously in space and time. There is little to count, in the field picture of the world. On the other hand, quantum mechanics has injected a robust dose of discreteness in fundamental physics: because of quantum theory, fields have particle-like properties and particles are quintessentially countable objects.” So maybe the Jovian intelligence will arrive at the concept of integers, but only after having discovered quantum mechanics! As Rovelli puts it, “what moderns physics says about what is countable in the world has no bearing on the universality of mathematics: at most it points out which parts of M are interesting because they happen to describe this world.”

In the concluding part of his paper Rovelli writes: “Why has mathematics developed at first, and for such a long time, along two parallel lines: geometry and arithmetic? The answer begins to clarify: because these two branches of mathematics are of value for creatures like us, who instinctively count friends, enemies and sheep, and who need to measure, approximately, a nearly flat earth in a nearly flat region of physical space.”

Even the history of mathematics as a field of inquiry militates against Platonism: “the continuous re-foundations and the constant re-organization of the global structure of mathematics testify to its non-systematic and non-universal global structure. … Far from being stable and universal, our mathematics is a fluttering butterfly, which follows the fancies of us, inconstant creatures. Its theorems are solid, of course; but selecting what represents an interesting theorem is a highly subjective matter.” Just like picking an interesting book from Borges’s library, or carving a statue the way Michelangelo did.

“It is the carving out, the selection, out of a dull and undifferentiated M, of a subset which is useful to us, interesting for us, beautiful and simple in our eyes, it is, in other words, something strictly related to what we are, that makes up what we call mathematics.”

So here is where I stand now on the matter: the joints efforts of Smolin and Rovelli amount to a hook and an uppercut punch to mathematical Platonism. It isn’t a knockout blow, but it’s pretty close. Then again, I changed my mind on this in the past. It may happen again.

277 thoughts on “One more on mathematical Platonism”