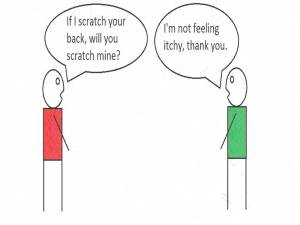 Think about the complexities involved in allowing you to do something that nowadays is fairly normal: getting on a plane and fly to another city, across an ocean. It’s not just the sophisticated machinery, ground transportation, the airports, and so forth. It’s the people. Accomplishing such a feat requires the coordinated cooperation of a large number of people who don’t know each other, and don’t know you or why you wish to get on that plane in the first place. This observation sets the stage for the next to the last chapter of Kevin Laland’s Darwin’s Unfinished Symphony: How Culture Made the Human Mind, which we have been discussing for a while now.

The first point Kevin makes in this chapter (n. 11 in the book) is that conventional evolutionary explanations, such as kin selection and other gene-based explanations are insufficient to account for the degree and sophistication of cooperative activities that have characterized human civilization ever since the agricultural revolution. A fully formed theory of cultural evolution is needed, to draw the outlines of which, of course, is Kevin’s goal. Obviously, the idea is not that cultural evolution is independent from its biological counterpart, but rather that it is a novel mode of evolutionary change that resulted from the particular path of biological evolution that hominins happen to have taken.

Two of the factors that make large-scale human cooperation possible are the ability to teach others, and language, which Laland has already argued itself evolved to facilitate teaching. A third factor was the origin of social norms. These specify how individuals are expected to behave within a group, including how to treat individuals who violate norms. Crucially, norms also make possible for people to identify with a particular group, as abiding by its norms carries privileges for in-group members.

Moreover, humans are pretty much the only animals capable of trading goods (there are a few alleged cases in other primates, but they are disputed), and certainly the only ones that arrived at that convenient abstraction we call money. This level of sophistication requires language, and it is both facilitated and made necessary by the existence of division of labor, something that evolved to a high degree of sophistication, again, after the agricultural revolution, which made possible the existence of large and stable groups of humans.

All of this coordination is beneficial thanks to the advantage provided to individuals by indirect reciprocity: I do something for you, you do something for someone else, and at some point down the line another person that has been benefiting from in-group membership does something for me. Like allowing me to safely cross the Atlantic to get from New York to Rome. Repeated bouts of indirect reciprocity require gossip, so that people have a sense of who they can trust and who to stay away from. Needless to say, gossiping, and hence the building and destroying of social reputations, is not possible, again, without language.

Language, in turn, also evolves, quickly generating local dialects. Dialects then rapidly become a mark of local membership, a quick heuristic to tell apart in- from out-group members. They increase within-group cooperation, and likely across-group conflict, which sets the stage for group selection at the cultural level:

“Cultural processes generate plenty of variation among human groups for natural selection to act upon. Extensive data now demonstrate that the differences between human societies result far more from cultural rather than genetic variation. … Symbolic group marker systems, such as rituals, dances, songs, languages, dress, and flags, make it considerably easier for cultures to maintain their identities and to resist imported cultural traits from immigrants, than it is for local gene pools to maintain their identity by resisting gene flow.” (p. 283)

This is something important to keep in mind, as it is intuitive to say that cultures change more rapidly than genes. While this is true if we are talking about mutations (which are, indeed, rare), it is not the case once we consider gene flow and genetic recombination, which happen far more frequently, as Kevin points out, than some types of cultural change.

Laland also remarks on the widespread existence of practices that synchronize the behavior of individuals, like group dancing, or military marches. These activities result in the simultaneous release of endorphins, which in turn promotes within-group bonding. The broader point is that humans evolved a psychology of group behavior that is entirely unknown in other animals, and that cannot be explained on the basis of standard genetic models of evolution. Pace the evolutionary psychologists, of course, for whom we have seen Laland has relatively little patience.

We are reaching the end of this series of posts on Darwin’s Unfinished Symphony. The next and last installment will focus on the cultural evolutionary origin and significance of art.