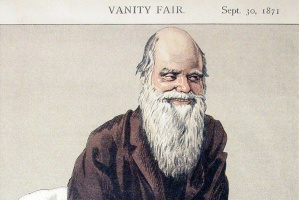 I find myself devoting more and more time to public outreach and what is increasingly referred to as public philosophy. But, you might know, I am also an academic and publish scholarship in philosophy of science. Which is why from time to time I like to combine the two and do a post that highlights for the general public some of my own technical publications. (A series of these, covering the range 2010-2016, can be found here.) The present essay refers to a paper that I published back in 2012, entitled “Biology’s last paradigm shift. The transition from natural theology to Darwinism.”

The theory of evolution, which provides the conceptual framework for all modern research in organismal biology and informs research in molecular biology, has gone through several stages of expansion and refinement. Darwin and Wallace proposed the original idea back in 1858, centering on the twin concepts of natural selection and common descent. Shortly thereafter, Wallace and August Weismann worked toward the complete elimination of any Lamarckian vestiges from the theory, leaning in particular on Weismann’s concept of the separation of soma and germ lines, and resulting in what is sometimes referred to as “neo-Darwinism.”

The theory then experienced a period of “eclipse” at the turn of the 20th century. Many biologists accepted the idea of common descent but either rejected or greatly de-emphasized the importance of natural selection as an evolutionary mechanism. The situation was exacerbated by the rediscovery of Mendel’s work, which pointed to an apparent incompatibility between discrete inheritance particles (“genes”) and the sort of continuous quantitative variation necessary for natural selection to produce gradual evolutionary change.

Famously, the crisis was overcome with the reconciliation of Mendelian and statistical genetics made possible by Ronald Fisher, J.B.S. Haldane and Sewall Wright in the 1930s, and that later on culminated in the Modern Synthesis (henceforth, MS) of the 1940s, to which several additional authors made important contributions, including but not limited to Theodosius Dobzhansky, Julian Huxley, Ernst Mayr, and George G. Simpson. The MS is still the version of the theory largely accepted by the scientific community, and it is what graduate students in the discipline are trained on.

More recently, several authors have pushed for an Extended Synthesis (henceforth, ES) in evolutionary biology, initially from a variety of individual perspectives largely rooted in particular fields of inquiry, such as Evo-Devo or phenotypic plasticity, and now with a more concerted effort aimed explicitly at the formalization of a broader conceptual framework for evolutionary biology (see here).

The ES is very much a work in progress, but the idea is to accomplish a number of goals that have so far proven somewhat elusive: first and foremost, to finally bring developmental biology – famously left out of the MS – into the fold. Second, to provide a coherent way to reconcile the “holistic” tendencies of organismal biological research with the decidedly more reductionist approach of molecular biology and its most recent products, the various “-omics” (genomics, proteomics, metabolomics, etc.). Third, to incorporate as primary players a number of biological phenomena and processes that had been either discarded or minimized within the context of the MS, e.g., phenotypic plasticity, genetic accommodation, epigenetic inheritance, etc. Fourth, to expand the standard theoretical toolkit of the MS – which is primarily grounded in population and quantitative genetic theory – to include elements from computational biology and complexity theory. Fifthly, to incorporate in evolutionary theory new concepts that have emerged from theoretical research during the past several years, chief among them the triad constituted by evolvability (i.e., the possibility of the evolution of evolutionary mechanisms), modularity (of different components of an organism’s phenotype) and robustness (i.e., the degree of resilience of developmental mechanisms).

In the paper I address the question of whether any of the above amounts to something akin to Thomas Kuhn’s famous paradigm shifts, i.e. whether evolutionary biology has ever undergone anything like what Kuhn describes as a moment of revolutionary science. I argue that it has not, and that it will not, even if the ES will succeed in establishing itself. Rather, I think the only time in the history of biology when such a transition has occurred was during the 19th century, when Darwin’s original theory replaced the dominant “paradigm” of the day, Paley-style natural theology. In the following I will discuss that particular paradigm shift, together with the general Kuhian notion of alternation between revolutionary and “normal” science. People interested in the same analysis applied to what happened to evolutionary theory after the onset of Darwinism are referred to the full paper.

William Paley is responsible for the most articulate defense of the idea that living organisms are the result of a special creation by supernatural forces. In his Natural Theology (1802) he famously introduced the metaphor of a watch and its watchmaker:

“In crossing a heath, suppose I pitched my foot against a stone, and were asked how the stone came to be there: I might possibly answer, that for any thing I know to the contrary, it had lain there for ever: nor would it perhaps be very easy to show the absurdity of this answer. But suppose I had found a watch upon the ground, and it should be inquired how the watch happened to be in that place; I should hardly think of the answer which I had before given, that for any thing I knew, the watch might have always been there. Yet why should not this answer serve for the watch, as well as for the stone? Why is it not as admissible in the second case as in the first? For this reason, and for no other, viz., that when we come to inspect the watch, we perceive (what we could not discover in the stone) that its several parts are framed and put together for a purpose (…) This mechanism being observed (…) the inference, we think, is inevitable, that the watch must have had a maker; that there must have existed, at some time, and at some place of other, an artificer or artificers, who formed it for the purpose which we find it actually to answer; who comprehended its construction, and designed its use.” (1802, p. 5).

Paley argued by analogy from the watch/watchmaker inference to the complex living organism/supernatural intelligent designer inference, despite the fact that such inference had been dealt a devastating philosophical blow by Hume, writing several decades before Paley, in 1779. Contrary to what has been assumed for a long time, Paley appeared to have been familiar with Hume, though he was obviously unconvinced by the latter’s arguments.

Darwin was initially persuaded by Paley’s reasoning, but eventually of course provided the decisive counterpoint that was missing in Hume: an alternative mechanism (natural selection) to generate both biological complexity and the pattern of common descent that was denied by Paley’s natural theology. It behooves us to briefly examine Darwin’s answer, so that we may then proceed to compare Paley’s and Darwin’s “paradigms” in view of Kuhn’s ideas to see whether we can sensibly talk of a paradigm shift occurring at the very onset of evolutionary biology as an independent discipline.

Although Paley is mentioned by name only once in The Origin (on p. 201 of the first edition in the chapter on “Difficulties on Theory”), Darwin mounts a concerted and sustained attack on natural theology in chapters VI and XIII of his magnum opus. Here are some relevant quotes to establish the case. First Darwin explicitly contrasts the type of “explanation” provided by natural theologians with a naturalistic explanation typical of the new science:

“He who believes in separate and innumerable acts of creation will say, that in these cases [of organisms’ behavior that have changed in response to a new environment, without – yet – an accompanying change in the structure of the proper organs] it has pleased the Creator to cause a being of one type to take the place of one of another type; but this seems to me only restating the fact in dignified language. He who believes in the struggle for existence and in the principle of natural selection, will acknowledge that every organic being is constantly endeavouring to increase in numbers; and that if any one being vary ever so little, either in habits or structure, and thus gain an advantage over some other inhabitant of the country, it will seize on the place of that inhabitant, however different it may be from its own place.” (1859, p. 186)

“It is scarcely possible to avoid comparing the eye to a telescope. We know that this instrument has been perfected by the long-continued efforts of the highest human intellects; and we naturally infer that the eye has been formed by a somewhat analogous process. But may not this inference be presumptuous? Have we any right to assume that the Creator works by intellectual powers like those of man?” (p. 188)

Immediately afterwards, he goes so far as laying out the criteria for the falsification of his hypothesis, in sharp contrast of course with the natural theologian’s ideas, which cannot be falsified:

“If it could be demonstrated that any complex organ existed, which could not possibly have been formed by numerous, successive, slight modifications, my theory would absolutely break down. But I can find out no such case. … Natural selection will never produce in a being anything injurious to itself, for natural selection acts solely by and for the good of each. No organ will be formed, as Paley has remarked, for the purpose of causing pain or for doing an injury to its possessor. If a fair balance be struck between the good and evil caused by each part, each will be found on the whole advantageous.” (pp. 189, 201)

To summarize, then, the idea of intelligent design – which had been around at least since Plato’s Timaeus – had been severely crippled on philosophical grounds by Hume in the 18th century. Still, Paley was able to mount a spirited and detailed defense of it at the onset of the 19th century, while Darwin provided the final blow to it (except of course for the modern resurgence of creationism, which is not an intellectually meaningful movement) for the first time on scientific grounds during the second part of the 19th century. It is on the latter transition that I wish to focus in part II, from the perspective of Kuhn’s paradigm shifts.

(next: the Paley-Darwin transition as a paradigm shift)